Murderers are an abhorrent societal segment among humans, but whoever would expect an insect to bear such a frightful moniker, and in this case, one that is so well deserved? Albeit just a nickname, the Asian Giant Hornet aka the Murder Hornet, is a force to reckon with, whether the confrontation is between a human being or a hive of bees.

The queens from this particular species are known to grow to two inches in length, and their mandibles, which can puncture a bee keepers suit, are reminiscent of small shark fins with the power to create a sting likened to hot metal being driven into the skin. Scientists have been forced to order special reinforced suits when dealing with this scourge of the insect world.

For those who have not had the pleasure of making the acquaintance, however fleeting, of this insect, it may, unfortunately, be just a matter of time, as they have already traversed the Pacific Ocean and have been seen and unappreciated in Washington state.

Indigenous to Japan, these not-so-charming critters, known as the world’s largest wasps, kill up to 50 people a year. According to Jun-ichi Takahashi, a researcher at Kyoto Sangyo University in Japan, this species earned its fearful moniker because it attacks aggressively as a group, which expose victims to doses of toxic venom equivalent to that of a highly venomous snake.

Scientists do not know for sure how these giant hornets found their way to America, but according to Seth Truscott, who is associated with Washington State University’s college of agricultural, human and natural resource sciences, it is likely they were accidentally transported in international cargo.

Will Murder Hornets Ever Reach Pittsburgh?

Pest-control and pest-management specialists are not expecting to encounter these unpleasant critters that are so far away from their Pittsburgh locations, but they are nevertheless, well aware of their potential presence and always, like that boy scout mantra, prepared to take appropriate action if deemed necessary. According to Pestco Professional Services’, Bob Wiemer, ACE, “it is highly unlikely they will ever reach the east coast or the Pittsburgh area, mainly because they wouldn’t survive the winters.” 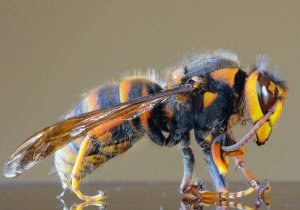 Asian Giant Hornets were first spotted last December in the northwest corner of Washington state, and scientists fear they are becoming more active in the last month or so because the time of year is approaching when the queens emerge from hibernation to wreak fear and havoc among bee populations and humans as they build their nests and form colonies. In Truscott’s on words:

“Hornets are most destructive in the late summer and early fall, when they are on the hunt for sources of protein to raise next year’s queens…They attack honey bee hives, killing adult bees and devouring bee larvae and pupae… Their stings are big and painful with a potent neurotoxin…”

These hornets have a very distinctive look that is hallmarked by a face so blatantly fierce that it could have been created by the pen of an angry cartoonist. Its stinger is about 1/4 inch long, and it is capable of injecting a large amount of venom that is so potent that it can actually liquefy human tissue. Eyes are teardrop-shaped in the same fashion as Spider-Man, and orange and black tiger-like stripes extend down its body. Wings are broad and wispy, with a span of about 3 inches.

Murder hornets can decimate a honeybee hive in a matter of hours. They decapitate the poor bees and fly away with their thoraxes to feed their young. A single hornet can crawl into a hive and kill as many as 40 bees per minute due to its large mandibles, which easily rip all their heads off. Beekeepers have taken action, as they are terrified that their onslaught will destroy more honey bee hives, which are already critically endangered.

The number of honeybees in the United States has been steadily decreasing for years, and the winter of 2018–2019 was one of the worst ever. This was due to unexpected challenges such as: the invasion of mites, diseases, pesticides and a loss of food habitats.

In Japan, Korea and China, Asian honey bees have developed a defense agains this indigenous  and lethal enemy. They start buzzing, raising the temperature in the hive and ultimately boiling the invading hornet to death. Unfortunately, American honey bees do not have this defense.

There were also a few discoveries of the Asian Giant hornet across the border in White Rock, British Columbia, which is approximately ten miles away from the Washington state sightings, and on Vancouver Island, across a body of water that e is thought to be too wide for the hornet to have traversed from the main land. That particular hive was located and destroyed. 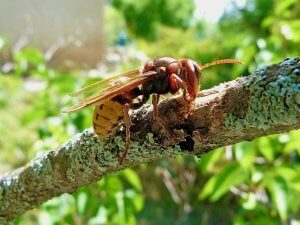 5 tips to help keep other types of stinging insects away from your Pittsburgh lawn this Summer.

Scientists in Washington have committed themselves to conducting a full-scale hunt for these dreaded hornets because they are terrified that these nasty invaders will not only decimate already endangered food-pollinating bee populations beyond recovery, but also manage succeed in establishing such a deep presence in the United States that that all hope for eradication will soon be lost.

According to beekeeper, Ruthie Danielsesen, who has helped organize her peers to combat the hornet,“Most people are scared to get stung by them, but we are very scared that they are going to totally destroy our hives.” In a region with a mild wet climate and miles and miles of seemingly endless woods for hornets to safely nest, finding and eliminating them is as close to finding a needle in a haystack as the expression could possibly permit. Nests can be underground and queens are capable of flying many miles per day at speeds of up to 20 miles per hour.

Dr. Chris Looney, entomologist from the Washington State Department of Agriculture, states: “They are not murder hornets. They are just hornets. They are not coming to get you. The number of people who are stung and have to seek medical attention is incredibly small. The worry for beekeeping in Washington is based on a worst-case scenario that officials have to take seriously.”

Despite doing his best to play down fears and worries, Dr. Looney and his industrious team have taken serious action by utilizing trapping systems for murder hornets that are similar to those used successfully in Japan, which involve hundreds of traps set within a particular grid. He filled some of the traps with orange juice mixed with rice wine, others had kefir mixed with water, and a third batch was filled with some experimental lures. This was all done in the hope of capturing a queen seeking a spot to build a new nest.

According to Looney: “If a hornet does get caught in a trap, there are plans to possibly use radio-frequency identification tags to monitor where it goes or to simply attach a small streamer and then follow the hornet as it returns to its nest.” Other alternatives include thermal tracking tools that could potentially follow the hum the hornets make in flight. Due to the noisy buzz of activity that is usually. present within a nest of Asian giant hornets, inside temperatures have been known to rise up to 86 degrees.

Murder hornets aren’t likely to establish permanence in the United States, but their appearance even in minute quantities is an issue that must be and is being addressed by the due diligence of Dr. Looney and other concerned entomologists.

It should be noted, however, that despite the fact that we aren’t likely to ever see this fearful critter scampering across our Pittsburgh pillows, they do pose a serious threat to the honeybees that pollinate much of our food supply. This is more than enough to arouse fear even among the most seasoned of professional technicians at Pestco Professional Services, who are always prepared to eliminate insect invaders of all kinds every day of their working lives.

Pestco Professional Services is a family-run, 5-star reviewed company that has been in continuous operation since the late 1940s. Founded on the American dream of a hard-working Lithuanian immigrant, Milton Zlotnik, our consistent growth over the last seven decades is largely due to our superior management, products and pest-control and pest-management services.

Under the diligent helm of Robert A. Wiemer ACE, Pesto’s Executive General Manager, areas of specialization have expanded from almost exclusive industrial and commercial applications to residential pest solutions. Our pest professionals understand that no one product ever fits-all strategies, situations and solutions.

We are Quality Pro and Sentricon Certified and proud members of the Pennsylvania Resources Council, the (NPMA) National Pest Management Association, the Entomological Society of America and the Green Building Alliance.

We utilize only products that are environmentally friendly and promote a carbon footprint policy that will insure the legacy of a green planet. Our integrated pest control and pest-management services (IPM) have practical, hands-on approaches that entail an extensive and thorough examination of the affected residence and the sealing up of any cracks and crevices that might permit future ingress.

While you may not encounter an ornery Murder Hornet, you may need our services to deal with other pest invaders that are not so charming. Whether they be cockroaches, rodents or other stinging insects, talk to our experts at Pestco Professional Services and see what we can do to return peace of mind to your household.

Final thought on Murder Hornets: The inscription under the image of an Asian Giant Hornet  sitting on a man’s hand  reads:

Dear Mother Nature: This Is Truly Uncalled For.  ~ Pinterest