Wasps are enormously diverse critters with about 30,000 identified species. Despite their fearsome reputation, most varieties do not sting and are solitary insects that control garden pest populations and do not build colonies, which in the case of some species can be enormous.

There are basically two wasp categories: social, which includes yellow jackets and hornets, comprise only about a thousand species, and solitary wasps. Within these categories, there are three key types of wasps that effect Pittsburgh homes and commercial properties. They are the Northern Paper Wasp, the Mud Wasp and the Ground Digger Wasp; each of which are no match for our careful, controlled pest control techniques and expertise.

Continue on to learn more about this potentially vicious beast, or call our team today for any pest control emergency! (412) 252-5200.

A social wasp queen emerges from hibernation with the advent of spring. She begins a new colony with the help of female worker wasps. Together, they construct a new six-sided nest in which the queen can continue laying eggs. By late summer, the wasp colony can grow to contain more than 5,000 insects, but the entire colony dies off in the winter with the exception of the newly fertilized queens. They survive the winter and replenish the colony the following spring.

Solitary wasps are among the family’s largest members. They include cicada killers and the blue-and-orange tarantula hawks species, both of which have been known to reach 1.5 inches in length. Solitary wasps mostly use their venom to hunt prey whereas social varieties use their stingers to defend their colonies.

The one quality that all wasps share is that they build multi-cellular nests. They create them mostly from wood fibers they scrape with their hard mandibles and chew to a pulp. Abdominal secretions are also sometimes added to the construction, which further strengthens the nest material and simultaneously helps to repel ants. All wasps lay their eggs inside the body of hosts (other insects).

The Different Kinds Of Wasps

The following are some of the more common species of wasps that might be encountered almost anywhere on the North American continent. All require the help of professional specialists, such as the technicians at Pestco, to safely remove from a business or residence.

This species is found in habitats ranging from southern Canada to central America. The queen of the species controls all the behavior of her subordinates and she rules with an iron stinger. Adult northern paper wasps are considered omnivores and insectivores, and they are a boon to agriculture and gardeners for they forage for caterpillars and other destructive insects, which provide food for the developing larvae.  They specialize in caterpillars, and they find them by sight and smell, seeking out vegetation that is likely to harbor them. Surprisingly, it was recently discovered that paper wasps are even capable of logical reasoning! 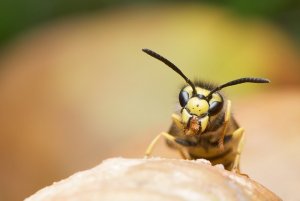 Also known as Mud Dauber Wasps, this solitary species builds nests and lives without the support of a colony. Their sting is reserved for trapping prey. Their moniker is derived from their unique ability to construct nests comprised solely of mud. This family includes a few subspecies, which are delineated by their color range (from black to blue to yellow) and by their one-of-a-kind nest formations. 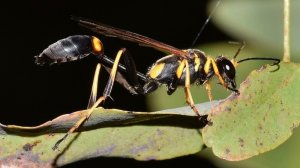 This species is also known as the Cicada Killer Wasp, and although they are much appreciated by gardeners because they pollinate flowers and beneficially permeate soil surfaces, their needle-like stingers are as formidable as their size, which can be as much as two inches in length. This categorizes them as one of the largest species of wasp and they are powerful enough to transport insects larger that they are (cicadas) back to their nest. 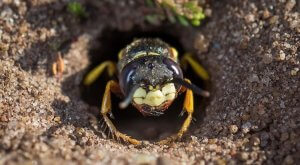 A Tarantula Hawk is a spider wasp that hunts tarantulas. There are more than 3,000 known species of spider wasps, but none more formidable than this one. This species uses its sting to paralyze tarantulas before dragging them back to their nest as living food. The Cuckoo Wasp, also known as the Emerald Wasp, is so named because of the strange and eccentric manner it lays its eggs in the nests of other unrelated host species. The Bone House Wasp is straight out of a Grade B horror film script, as it captures spiders alive and locks them in a “corpse cellar” where they are eaten alive.

The Wasp’s Place In Nature

The average wasp, despite its reputation, leaves its own unique imprint on the world’s eco-system and is beneficial to the human race. There is hardly a species of insect anywhere on earth that doesn’t serve as prey to a wasp species, either as a source of food or as a host for its bloodsucking larvae. Wasps eat dead insects and flies as well, and they are so skilled at controlling pest populations that the agriculture industry considers them as formidable weapons they deploy to protect their precious harvests.

Many social wasps are generalist predators, which means they do not affect the balance of nature that bio-diversity sustains. They also minimize the need for noxious pesticides. Some wasp species, such as fig wasps, also play a significant role in pollination. These particular wasps are the only known pollinators of almost 1,000 diverse species of figs. The relationship between figs and fig wasps is an incredible symbiosis, for neither the fig nor the wasp can complete their life cycle without the other.

Due to the fact that figs are vital to the diets of many mammals and birds in the world’s tropical regions, the extinction of these wasps would be cataclysmic to these ecosystems. In addition, there are almost one hundred species of orchids that rely on wasps for pollination. Generally speaking, wasp diets of agricultural pests such a caterpillars, aphids and whiteflies contribute enormously to global food security.

Wasp Danger and Damage To Pittsburgh Residences and Industry

Our experts at Pestco are fully aware that social wasps are a nuisance in home gardens, nurseries and areas around commercial properties. They build their colonies in buildings, hollow trees and walls. They are known to favor ornamental plants, such as the Dahlia, as they gnaw on the tissue from the woody stems and cause the plants to collapse under their own weight. It is the need for sugary substances to feed developing larvae that drive worker wasps into orchards, where they mutilate fruit crops such as apples, pears and grapes by chewing holes into the sides of the fruit.

The presence of wasps should never be taken lightly, and their removal is best left to our pest-control and pest management experts. Officially established as a mom-and-pop home-based business by a Lithuanian immigrant named Milton Zlotnik in 1948, our knowledgeable, highly trained technicians provide superior services to all types of residential and commercial enterprises throughout Pittsburgh and environs, Western Pennsylvania, Eastern Ohio and the West Virginia panhandle.

Zlotnik approached his new business, which he originally named Pittsburgh Exterminating Service and Termite Control as a learning experience, and he started by finding out as much as he could about insects. He sought out and made the acquaintance of Arnold Mallis, the leading entomologist of the day, whose book, The Mallis Handbook of Pest Control, to this day is considered the ultimate authority on metropolitan entomology.

Through hard work and determination, Zlotnik and his wife, Marian, nurtured this business with all the care and attention of a gardener tending to new spring blooms. Down through the decades, Pestco developed a stellar customer service reputation that to this day services high-profile commercial accounts in the Pittsburgh area, including Heinz Field and PNC Park. In continuous operation for more than seventy years, this family owned and 5-star-reviewed business is a leader in the pest control and pest management sector.

Today we provide superior emergency pest control and pest management services and use products that far exceed industry standards. Our pest solutions are steeped in extensive hands-on experience, and we are based on the principles of prevention; inspection; exclusion; understanding insect behavior and the ability to identify signs of any type of infestation. We rely exclusively on green, sustainable products that do not contain harmful pesticides that can greatly impact the carbon footprint we all hope to leave for future generations.

Call Pestco Professional Services today for help with our pest control and pest management services. Eliminate that wasp problem with a company you can trust! (412) 252-5200

Final thought about wasps: Anger is as a stone cast into a wasp’s nest.– Pope Paul Vl

More than 110,000 species have been identified, and scientists estimate that there are another 100,000 waiting in the wings for discovery. One recent study described 186 new wasp species that were found in one small section of the Costa Rican Rain Forest alone!

The stingers are actually modified egg-laying organs. Female wasps can sting a target multiple times because their stingers do not fall off after use.

Although this insect rarely stings without extreme provocation, its sting is extremely powerful and is considered to be one of the most painful in the world. Although the intense pain may last for only about five minutes, it has been described as “unrelenting, immediate and excruciating.”

The record life cycle for wasps remaining in the same nest is 30 years.

In 2015, a twelve-year-old boy in Tasmania found what is believed to be the largest European wasp nest in the world. It is estimated to weigh about 200 pounds and to be about two years old. It is believed to house several hundred thousand wasps.

Wasps are known to chew up strips of bark and spit it out again to form a rough type of paper they use as nesting material.

Within the family, Mymaridae, this solitary species of parasitic wasp has a body length of only 139 mm (0.0055 inches). This incredibly small insect means death and destruction to many developing garden larvae including: two-winged flies, beetles, moths and butterflies, aphids, leafhoppers, scale insects andwhiteflies.

Since the 19th century, the image of wasps served as centerpieces for diamond and emerald brooches set in both gold and silver. The wasp-waisted female silhouette was also very famous in the nineteenth and early twentieth century. It was distinguished by a tightly belted waistline that emphasized the hips and bust.

The iconic Italian scooter, the Vespa, is the word for wasp in Italian.

If you have any residential and commercial pest control problems with wasps, call our team at Pestco Professional Services for a free estimate, or take part in our Pest Friends referral program, and receive huge savings on your current service!

If you’re a business anywhere throughout Great Pittsburgh, Western Pennsylvania, Eastern Ohio or within the West Virginia panhandle, and you’re looking for the perfect one-stop shot program that includes pest control, odor control and restroom hygiene services, check out our video on our Complete Facility Care program below.