The expression, “eating one out of house and home” was not originally meant to refer to termites, but it might as well have. Termites are the smallest, yet most devastating, wood-destroying insects on the face of the earth and their daily activities can and often do ravage entire homes and structures. They never stop eating and tend to nest in and around susceptible buildings. They do their damage almost completely unnoticed until the damage is excessive, creating severe challenges for pest care and pest management professionals, underscoring the importance of ongoing professional preventative measures.

Read on to learn about these little critters and the preventative measures needed to combat it, or, if your home is in East Liberty, North Side, South Side, Tarentum, Lawrenceville, Fox Chapel, Oakmont, Monroeville, Sewickley, Penn Hills, Cheswick, Oakland, Shadyside, Robinson, Squirrel Hill, North Hills, South Hills, Forest Hills, The Golden Triangle, Downtown, The Strip District, Carrick, West End, Wexford, Warrendale, McCandless, Saxonburg, Sarver, Cranberry Township or any other community throughout Allegheny County, contact our team today, (412) 252-5200, to get the very best in termite prevention and extermination services. 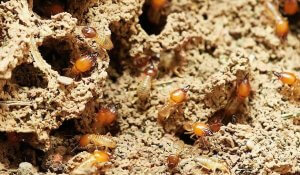 Termites live in underground colonies where labor is carefully divided. Every insect has a specific task that benefits the colony as a whole, unlike other insects, like grasshoppers or roaches that work only for themselves. For example, the soldier caste comprises 1/3 of the population and their job is to protect the colony. They cause the most damage by eating wood and building tunnels. An entire caste is responsible for feeding their parents and siblings, while another, the queen, only reproduces. She can live up to ten years and is the reproductive heart of the population.

Although there are many types of termites found all over the nation, the subterranean variety is the plague of Pittsburgh homeowners and the species that our pest control experts are often called upon to remove. This termite builds tunnels known as mud tubes that protect them from the open air and grant them ingress to food sources. These underground nests of damaged wood also contain an accumulation of soil or mud. While their diet is comprised primarily of cellulose, as is the regimen of other termite species, subterranean termites eat only softwood and they eat with the grain and not across it as is the case with other species.

It is believed that subterranean termites locate their food sources when digging their tunnels. Foraging termites do this by producing pheromones that act as chemical messengers to other termites and attract them to a food source. Soil temperature, moisture and the size and quality of the food source greatly influence the strength of the pheromone trail. These insects have had centuries to perfect their skills, as scientists estimate that termites have inhabited earth for more than 55 million years.

Due to the fact they are always at risk of drying out, these termites must live deep within the soil, which maintains a constant level of moisture. Even when they forage above the ground, they never venture very far from the soil where they must return periodically via the mud tunnels to replenish their body moisture.

Every year, more than 4 million homes within the United States are at risk of termite infestation, a percentage of which are right here in Allegheny County. Recent statistics indicate that termites incur an estimated annual $5 billion in property damages and repair costs. This figure is even more staggering when it comes to damages to building structures and crops, which amounts to an unbelievable $30 billion.

Usually, colonies take more than five years to grow to a size capable of causing damage to buildings. Due to the fact that termites consume cellulose, any wood material serves as a potential food source. Many Pittsburgh homeowners experience the destruction of books, documents and photographs as well.

A single colony of subterranean termites contains anywhere from 100,000-1,000,000 termites and they can forage up to 150 feet in search of food. In the case of a full-blown termite infestation, professional help from the expert pest control and pest management technicians at Pestco is required to both eliminate the residential invasion and prevent another one from arising.

Annual inspections are a vital aspect to any effective pest control and pest management strategy. They are as inconvenient as they are necessary to insure that termites have not found new ways to enter a Pittsburgh residential property.

Termites And The Damage They Cause To Residences

It must be noted that since there is no one central U.S. government agency or scientific organization that tracks termite data and damage, the following estimates are based on assumptions from infestations reported to state agriculture agencies and academic experts.

Termites cause an estimated $5 billion in property damages and repair costs annually. This figure is even more staggering when it comes to damages incurred to building structures and crops, which amounts to a staggering $30 billion. More than 600,000 homes within the United States are afflicted annually with termite infestations. Subterranean termites eat all the time, which makes them the most destructive insect species found in the United States.

At the point of damage discovery, the average homeowner will spend an average of $3,000 for repairs. Repair costs vary and depend upon the size, location and accessibility of the infestation as well as the home’s construction. Damages can range from slight to severe and in rare cases, can be so extensive that pest care and pest management may recommend that a home be demolished.

We are consistently at work in our Pittsburgh laboratories determined to counteract the destructive nature of subterranean termites through study and research via state-of-the-art equipment and tools. We are focused on both the basic biology and behavior of termites and on creating products that will not only eliminate infestations, but will also serve to protect structures from their destruction.

According to Specialty Consultants Partner, Rich Kalik: “We expect the industry to continue to grow with the sale of preventative post-construction termite treatments. These are defined as treatments to established structures that do not have a termite or other wood-destroying organism (WDO) infestation.”

Even though many structural infestations are often beyond redemption before they show themselves, there are some preventive measures that Pittsburgh homeowners can take. For one thing, according to our pest control experts, lumber-supporting structures that do not make direct contact with the earth can help to deter subterranean termites from foraging in the soil. Maintaining lower foundation walls and siding that is clear of vegetation or mulch can promote easier inspections for termite shelter tubes. Any section of a home and its perimeter that collects excess moisture, such as leaky plumbing or air-conditioning condensate must be addressed. Termites thrive in moist habitats.

We understand that no one product ever fits-all strategies situations and solutions. We utilize only products that are environmentally friendly and promote a carbon footprint policy that will insure a green planet for future generations. Our technicians are highly trained and experienced and attend workshops that always keep them a few steps ahead of the destructive insect pests they face every day. We take the time to educate our clients as well, as to what they can do to minimize the risk of returning termites. We welcome questions and offer helpful answers.

Noah was a brave man to sail in a boat with two termites. ~ Church Sign

Some Little Known And Interesting Facts About Termites 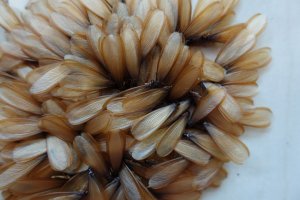 Although certainly creepy, there are some fascinating facts about termites. Getting to know more about these destructive pests can help keep them away from your home.

Termite and ant colonies can overlap each other and when this happens, the respective soldier castes of both species go to war over territory and foods. These clashes consist of organized invasions upon colonies.

Although not common, some termite species create dirt mounds that resemble buildings. These mounds can be very large, especially in parts of tropical Africa where they sometimes measure more than 30 feet high.

Termites have sense organs located on their base of their antennae and tibiae that allow them to sense vibrations. Scientists have observed that some termite species sense particular vibro-acoustic signals emitted by various pieces of wood that aid in the selection of food sources.

The first termites are estimated to have appeared during the Triassic Period, which spanned more than 50 million years and dates back 248 to 200 million years ago. The first Mesozoic Era, it marked the evolution of the dinosaur.

There are probably even more species that have not yet been discovered, as many live in tropical forests, and remote areas. They are so numerous that scientists estimate that they comprise 10% of all animal biomass and 95% of soil and insect biomass in tropical regions.

This species appears to be the last of its kind. It bears some resemblance to the cockroach and lays eggs in pods as roaches do.

These types are defined by their diets. Damp wood termites only consume wet, rotting wood. Dry wood species only eat dry wood and the subterranean variety only feeds on the soft woods found under the soil.

Despite the severity of the damage they cause to homes and structures of all kinds, termites promote the health of our forests and the decomposition of soil. They break down tough plant fibers and recycle dead and decaying trees into new soil.

In almost all termite species, both the workers and soldiers in any colony are blind. They spend their lives in the confines of the dark, damp nest, and have no need to develop functional eyes.