The sight of a cockroach the size of a human thumb crawling out of your bathroom drain and scampering across your sink or tub is repulsive enough to send a cold shiver up and down most spines. Like an entity from beyond the darkest realms, the presence of even one of these insects is truly frightening to behold.

The filth they live in and pathogens they carry can quickly spread throughout your business or home, contaminate food sources and make residents very sick. Also known as the water bug, Bombay canary or palmetto bug, by any other name, these creepy crawlies are the stuff of nightmares.

They are nocturnal creatures and the thought of one of these insects creeping up an arm while your sleep or across your face is enough for anyone to consider sleeping with the lights on. They are known to avoid light, but rest assured. They will find you, one way or the other. 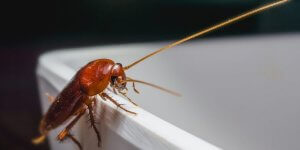 Despite their moniker, American cockroaches are native to Africa and the Middle East. They are believed to have been brought to the New World in the 17th century as a result of human commerce (including the slave trade). They are found mainly in basements, sewers, steam tunnels, and drainage systems and they enter private residences from sewers, via the plumbing, and from trees and shrubs located alongside buildings or with branches overhanging roofs.

The American cockroach is usually found in private residences after a heavy rain and is more often encountered in commercial and large buildings such as restaurants, grocery stores, bakeries, and anywhere food is prepared and stored.

Environmental Significance of the American Cockroach

In the United States during the warmer months of the year, alleyways and yards can be overrun by these cockroaches. There are filthy pests that spread disease, contaminate food and trigger allergies and even asthma. According to the World Health Organization (WHO), they are proven or suspected carriers of the organisms causing diarrhea, dysentery, cholera, leprosy, plague, typhoid fever and viral diseases such as poliomyelitis.

Their association with human waste and disease and their ability to move from sewers into homes make American cockroaches a public health problem and an issue for commercial establishments as well. According to an 1981 study conducted by Bell and Adiyodi, at least 22 species of pathogenic human bacteria, viruses, fungi, and protozoans, as well as five species of helminthic worms, have been isolated from field collected American cockroaches found in caves, mines, privies, latrines, cesspools, sewers, sewage treatment plants, and dumps.

In addition to being positively nauseating to behold, American cockroaches transfer germs onto food and food surfaces that their legs and bodies their legs have picked up as they forage through decaying matter and sewage. They soil items with their excrement and regurgitation. (If this isn’t enough to make a home-owner throw up his or her lunch, it would be difficult to imagine what exactly would do the trick!

During the colder months of the year, American roaches gain ingress to residences via sewer connections, plumbing and air-ducts, seeking warmth and readily available food. Generally speaking, the faster the pest-control and pest-management specialists can begin to attack the problem, the faster the infestation can be addressed.

1. If you see them, you’ve got a problem

The first and most obvious indication of an American cockroach infestation occurs the moment a homeowner spots one scampering from one place to another. Since they are nocturnal insects, they usually scatter once a light is turned on. It’s a sure sign that an infestation has taken hold of residence if a home owner sees them during daylight hours. This usually indicates a lack of food sources, which causes them to brave the light and is an immediate call to our pest control specialists for drastic and immediate action – (412) 252-5200.

When a homeowner notices a large amount of feces in key locations such as behind the stove and refrigerator, that is a clear indication of a high traffic zone and a large roach infestation. Other sites in the home can include: sinks, inside floor drains, beneath rubber mats and within wall cracks, pantries, cupboards and other food storage areas in the home. Outside a home, American cockroaches wander through mulch, woodpiles, flowerbeds and under shingles.

Another sign of an infestation is the presence of oval-shaped egg cases, known as oothecae. They are often found behind furniture and in other hidden locations, such as the spaces between books. These egg cases measure around 0.9 centimeters (0.35 in) in length, are brown in color, and purse-shaped. The American cockroach’s ootheca is usually dark brown and averages 8 mm in length. One female can create up to 90 egg cases in her lifetime and she carries them for a period ranging from a few hours to a few days until she is ready to deposit them in. a safe location.

American cockroaches produce a pungent, musty odor that worsens with the density of the infestation. This oily smell usually comes with large numbers of roaches and it can linger in the air and affect the taste of food.

10 Gross Facts About The American Cockroach

The following facts about American cockroaches may or may not be well known to the average home owner and may very well fall into the category of “too much information.” Nevertheless, here they are, of better or for worse.

1) They Are Fast Runners

If there is one thing more repulsive to look upon than an American cockroach walking across a drain, it would probably be one running either towards or away from you. Even though the latter is far more likely, it is astounding to think that this species of roach can move up to 50 body lengths per second, which compares to a human running 210 miles per hour. This is why it is not recommended to try to outrace them, as it will not be you who wins.

2) They Can Develop In Enormous Numbers

They vary in size from 1.1 to 2 inches in length. Adults can sometimes grow to exceed two inches. In addition, they are known to molt about 13 times before metamorphosis and their life span of 700 days is considered the longest among roach species.

As is the case with many other insects, cockroaches take in air via the holes in their bodies called spiracles. They have the capacity, however, to sometimes shut down these holes both to prevent water loss and the absorption of too much oxygen. Cockroaches can keep their spiracles shut for up to forty minutes when they are in water, which serves as an effective escape measure.

If it is not enough to freak you out to see these gross critters creeping on the ground, consider one of them flying over your head! In the immature (nymph) stage, American cockroaches do not have wings, but as adults both male and female roaches have wings and can fly short distances.

Forget about being lucky enough to just have one of these creepy-crawlies in your home. You may see them one at time, but there are always countless others waiting for their chance to defecate and leave behind chemicals that let others of their ilk know they were there. They produce a chemical known as an “aggregation pheromone,” the odor of which causes roaches to stay together in groups. Some describe the smell as musty, and as the population expands, humans with sensitive noses may find the environment to be most uncomfortable.

When in groups, they explore their surroundings in search of food. Once found, they send signals to others and they all gather for a feast. A swarm of these repulsive critters crawling all over your dining room table could be more than enough to forgo Thanksgiving or have it somewhere else after you find a new place to live! Hopefully, the pest-control and pest-management specialists will be called upon the scene before such a gross vision could ever become a reality. Keeping American cockroaches out of your home is and must be an ongoing process. Each home and infestation is unique and requires a customized program initiated by professionals to address the situation.

7) American Cockroaches Will Eat Anything

Apart from eating human food, American cockroaches will consume any type of organic matter. This can include a disgusting diet of: dead insects, paper, cloth, soap, wood, glue, hair and fecal waste. Even more nauseating to contemplate is the realization that even though American cockroaches may prefer sweets, starchy foods and meats, they will never run out of food. 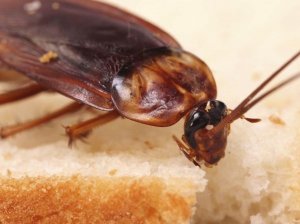 To make the situation even worse, these critters can live for weeks without food. This is due to the fact they are cold-blooded creatures and can maintain low metabolisms. Roaches cannot live longer than two weeks without water though, and more often, they die of thirst unless pest-control and pest-maintenance experts get to them first.

Not only can these roaches squish themselves to get into one-tenth-of-an-inch crevices, once they are inside they can run at high speed even when they are flattened in half! The American cockroach can squeeze through cracks the width of two stacked pennies. Furthermore, when traveling across crevices, roaches can withstand forces 900 times their body weight without injury.

These roaches like to be near water. If necessary, they can survive for a couple of weeks without it, but they prefer to be at least near a source. It is for this reason that they are often found near drains and sewers.

10) Cockroaches Are Older Than Dinosaurs

Cockroaches have been around longer than humans and our earlier ancestors didn’t even have the benefit of bug spray. Recent studies place their origins as far back as 359 million years ago.

The best integrated pest control and pest management services in Pittsburgh and western Pennsylvania are those performed by our team at Pestco Professional Services! Why? Because we have been have been in continuous operation since 1948 and our pro-active approaches entail an extensive and thorough examination of any affected home or facility and the sealing up of any cracks and crevices that might permit cockroach ingress. Even more, our inspections are ongoing throughout the year.

Each infestation is unique and we are all about versatility. Our technicians are knowledgeable and highly trained to always keep a few steps ahead of these creepy crawlies that can ruin both a residence and the bottom line of any commercial enterprise.

Most importantly, we incorporate a policy of pest exclusion, which is a first and most important line of defense against infestations. This pro-active tactic involves sealing up potential points of entry. Our main selling point concerning the incorporation of a pest exclusion policy is the fact that it’s much easier and safer for the environment to keep pests out of a residence or commercial space than it is to eradicate an infestation once it takes hold.

Our products are 100% sustainable and their solutions are based upon both biology and the natural life cycle of pests.

Final thought about roaches: A cockroach likely has no less brainpower than a butterfly, but we’re quicker to deny it consciousness because it’s a species we dislike. ~ Jeffrey Kluger

Why September Brings Out The Worst In Stinging Insects

Are you seeing more and more critters with stingers drifting across your property and causing significant consternation among family members? No, it’s not an unpleasant, painful mirage. While it might …

10 Tips To Help Protect Your Home From Pantry Pests

Pantry pests is a most unimaginative moniker for insects that like to hang out in your pantry. Also known by the equally humdrum name, Stored Product Pests, these critters have an insatiable appetite …

How Fast Can Mice Breed In Your Pittsburgh Home?

How quickly can mice breed within your Pittsburgh home? Well, they actually reproduce more rapidly than rabbits. One single female can produce five to 10 litters annually, averaging six to eight offspring …