The Spotted Lantern Fly is an invasive species indigenous to China, Bangladesh, and Vietnam that is currently plaguing areas all across the eastern seaboard and in many Pennsylvania counties particularly.

These highly destructive insects were first discovered in the United States in September of 2014 in Berks County in the southeastern part of the state, and this year populations have exploded, with reports of sightings jumping 147% statewide since last winter. There have been confirmed cases in Allegheny and Beaver Counties, Swissvale, Avalon and some Pittsburgh neighborhoods as well.

But what exactly is a Spotted Lantern Fly, where did it come from and what should you do when you see one? Our team explains. 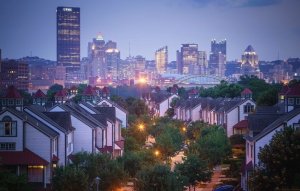 What is The Spotted Lanternfly?

This species (Lycorma delicatula), which is also known as a lantern moth, is in reality neither a fly nor a moth. It is, instead, a member of the Order Hemiptera (true bugs, cicadas, grasshoppers, aphids, and others) and the Family Fulgoridae, which are also known as plant-hoppers.

The Spotted Lantern Fly adult feeds on the plant sap of many different plants including: grapevines, maples, black walnut, and other important plants native to the state of Pennsylvania.

In appearance, adults are about an inch long. They are attractive and multi-colored; the forewing is grey with black spots, wing tips have black spots outlined in gray and the hind wings have contrasting red and black and white patches. The legs and head are black, and the abdomen is yellow with black bands.

This insect is as strikingly beautiful in both its nymph and adult stages as it is deleterious to the environment. Both life phases are lethal to plants. It feeds upon the sap gleaned from the stems, leaves and trunks of trees.

Spring in Pennsylvania is marked by the vision of lantern fly nymphs resting on small plants and vines and newly emerged trees and shrubs. Adult flies may be found feeding on the trunks and branches of trees that are wounded and dripping with sap caused by the feeding process.

This pest coats the plant with its excrement, which creates a sooty mold that attracts wasps, hornets, bees and ants. In addition, the weeping sap emits a fermented odor when a tree is plagued with an infestation.

What Dangers And Damages Does This Insect Pose?

This moth-like pest is a huge menace to Pennsylvania’s agriculture industry. Infestations threaten billions in economic impact and hundreds of thousands of jobs for those in the grapes, apple, hops, and hardwood industries.

According to the Pennsylvania Department of Agriculture, this insect is known to cause an estimated $324 million in damages annually to fruit, ornamental and other trees, and woody plants. It causes serious harm with its oozing sap, wilting, leaf curling, and tree dieback, which is a condition of progressive death in twigs, branches, shoots, or roots, starting at the tips. The lantern fly is also highly destructive in other ways that affect the quality of life to homeowners.

Spotted Lantern Flies are harmless to humans, but as already stated, highly toxic to plant life. In counties infested and quarantined, residents report hundreds of these insects that prevent them from enjoying outdoor activities during the warmer months of the year. They are known to blanket trees, swarm in the air, and their excrement can smother cars, decks, lawn furniture and play equipment.

In Pennsylvania, this pest has been found in 26 counties, all of which are under a state-imposed quarantine. Allegheny and Beaver counties have been particularly afflicted with these invasive pests and businesses have been forced to take precautions when shipping anything outside their respective locales.The quarantine also affects vehicles and other conveyances, plant, wood, stone products and outdoor household items. 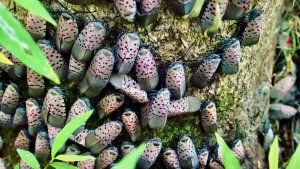 In the words of Heather Leach, an extension associate with Penn State’s Department of Entomology, whose full focus is to deal with the Spotted Lantern Fly invasion: “This is a critical time for Allegheny County. The federal and state departments of agriculture have contracted with Penn State University College of Agricultural Sciences to conduct public outreach and other work on the lantern fly scourge…Populations can can grow quickly in as little as two years…”

According to Pennsylvania Department of Agriculture Press Secretary, Shannon Powers: “Teams of PA Dept. of Agriculture and USDA inspectors follow up on every report in newly quarantined counties and outside the quarantine, treating confirmed sightings as appropriate… Statewide, from January 1 through July 31, this organization  received 41,329 reports from the public about sightings of Spotted Lantern Flies, which have accelerated from the same time period last year when the agency received 16,747 reports…Spotted Lantern Flies have jumped across several counties to Allegheny and Beaver so it’s not a natural spread. … It’s been hopping around, hitching rides to a new place, and…  the transportation industry is a key partner in combating this bug in Pennsylvania.”

Here are 11 tips for a pest free winter home! 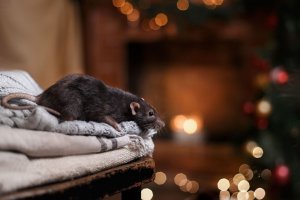 How Can The Spread Of This Pest Be Controlled?

Spotted Lantern Flies are invasive hitchhikers and are spread long distances by people who inadvertently transport infested materials or items containing egg masses from one area to another.

This can be avoided, at least to some degree, by thoroughly inspecting vehicles, trailers, and clothing for these formations. When leaving an area where this insect has been spotted, make sure to examine outdoor equipment for egg masses or any other life stages. Do not move nursery trees, firewood, mulch or related materials out of quarantined areas. Keep the windows of vehicles rolled up and avoid parking below infested trees.

The Spotted Lantern Fly’s highly preferred victim is the Tree of Heaven (Ailanthus altissima),which is native to China and was originally brought to the United States in the late 1700s as an ornamental street tree. This tree is also known as: Stinking sumac, Chinese sumac, Varnish tree and Stink tree because its flowers release a highly offensive smell.

Female trees produce abundant seeds and they are hardy and can thrive in a variety of soils. Its ease of establishment, rapid growth and absence of insect or disease problems made it a popular choice when planning urban landscaping.

Ironically, now the Tree of Heaven is considered an invasive plant that has spread aggressively across most of the United States, and it has met its match and advanced the spread of Spotted Lantern Flies that seek out this tree as a site to lay their eggs. They are also known to feed upon at least 70 species of other trees, as well as vines and shrubs, including: fruit trees, hops, grapevines and several hardwoods.

We are a five-star, family owned enterprise in continuous operation since the end of World War II. Since then we have become one of the the leading pest-control and pest-management company throughout Greater Pittsburgh, Western PA counties and the surrounding areas.

Our goals have remained unchanged down through the decades; namely, to provide experienced, responsive and uncompromising pest-control and pest-management services to all of our loyal customers who now include a growing roster of home owners as well as as commercial and industrial establishments.

The Pennsylvania Department of Agriculture is the agency to contact if these insects are spotted near a residence or commercial space. Homeowners are advised to kill them on sight (here are some tips), although they are fast, and this is easier said than done. The sight of one can mean there are many, and it takes a dedicated team and concentrated community action to eradicate them from an affected area.

For all other pest-control and pest-management issues, contact our team at Pestco Professional Services! We’re here to help! (412) 252-5200