Are you seeing more and more September stinging insects drifting across your property and causing significant consternation among family members?

No, it’s not an unpleasant, painful mirage.

While it might not seem so, this actually signifies the changing of seasons because the populations of bees, hornets and wasps are at their largest around that time of year. 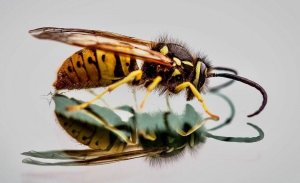 Nests have been growing all summer, and the natural food sources that have sustained them all season long have depleted, which means foragers are released from the nest to search for food, thus increasing the chance of encounters with both humans and pets.

During the early fall, some species are preparing their queen for the winter months to come and become more protective near the hive.

They are more aggressive and there are more of them to boot.

Even though the colder weather will eventually decrease their numbers, their presence can be very annoying and even alarming.

Yard work, clearing the gutters of leaves and raking the lawn often place a homeowner in the path of stinging insects because these chores are likely to occur close to nests, whether they are located in an eave of the house or a hole in the ground.

Outside help from the pest-control and pest-management specialists at Pestco is vital at this time of year, as the queen of some species will leave the nest to spend winter in a crack or void of a building.

Treating the nest before this happens can reduce the likelihood of having one built on a homeowner’s property the following year.

These species hibernate as adults and are often seen in great numbers in the autumn.

Many large wasps seek shelter in the eaves and attics of homes or barns. Other housing can include: tree holes, leaf litter, and under logs and rocks.

People get stung more often by wasps during the autumn and treatment for the sting also takes longer to work.

The following represent the subject of many a distressed homeowner’s call for help to Pestco, and they are the most common stinging insects found in the Pittsburgh area at the onset of fall.

By the end of summer, the population of this ground-nesting wasp species has reached its peak.

They are highly social insects that live in colonies that can number in the thousands.

There are some 16 species of yellow jackets found throughout the eastern United States, from the Atlantic Ocean to North Dakota and Texas.

They are commonly found in Pittsburgh parks, woodlands, lawns, and even inside recreational areas and homes. 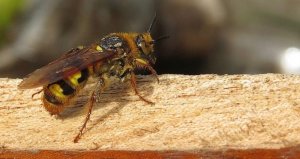 They are easily identified by their bold, black and yellow markings and a mostly yellow face.

Although Eastern yellow jackets are considered beneficial insects because they reduce the number of pests, such as earwigs and caterpillars, that can destroy crops, they vigorously defend their hives and are known to inflict painful stings if they are disturbed.

They can sting multiple times, injecting neurotoxin, and people who may have allergies can experience severe reactions and may require visits to the Emergency Room.

Attempting to remove a yellow jacket nest on private property is best left to the pest-control and pest-management specialists at Pestco. (Or in other words, don’t try this at home.)

Their name derives from their largely black bodies and chiefly white faces. Bald-faced hornets are found throughout the United States, and they build aerial nests that can grow to the size of a basketball.

They are often situated 10-12 feet off the ground. 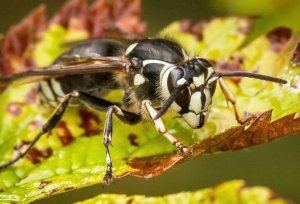 This aggressive species can deliver a powerful sting if they are provoked or threatened.

Their smooth stingers have the capacity to sting repeatedly with no damage to the insect and much pain to the target.

They can inject a large amount of venom into any predator that invades their nest, and this toxic material is often sprayed into faces, especially the eyes.

Fertilized queens overwinter in stumps or rotten logs, protected from the cold. Each will begin a new nest and colony the following spring.

A queen seeking the right spot may move indoors through gaps in roofing or around eaves.

There have been nests found in western Pennsylvania that are as large as 24 inches in height and 18 inches across.

They can contain as many as 700 hornets, which is a formidable number even for our expert technicians at Pestco, who are specially trained to deal with these scary critters.

Although paper wasps are often mistaken for bees, they do not have the characteristically fuzzy bodies that are associated with bees.

Their name is attributed to the manner in which they create paper from chewing wood and vegetation, which serves as nesting material. 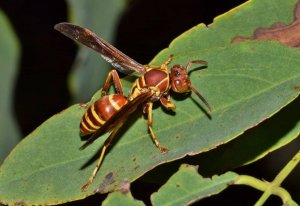 Paper wasps are found throughout North America and are identified by their 0.5-1.5 inch-long reddish brown or black body, and the striking yellow rings around their abdomens.

Not as aggressive as other wasp species, they do sting people if they feel threatened.

They are beneficial to gardens because they feed on nectar and eat pest caterpillars that destroy crops.

Their close proximity to homes and gardens means they commonly cross paths with both humans and pets.

They tend to build nests in attics or the corners of a dark garage.

By hibernating, adult mated females are the only members of the hive to survive sub-freezing winter temperatures.

Although a solitary species that goes into diapause (hibernation) during the colder months of the year, carpenter bees are known to become more aggressive in the fall due to a dwindling supply of nectar, which forces them to seek other sources of sweetness that are available in most households.

They can cause considerable property damage to the wooden structures in a home with the holes they bore to make their nests. 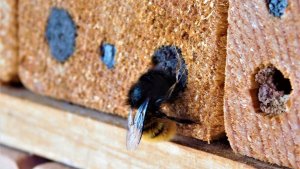 They naturally nest in dead trees and woodpiles, but they also bore into exterior wood on buildings, fences, decks, and outdoor furniture.

Homeowners sometimes mistake carpenter bees for bumble bees because of their similarities in size and appearance.

Most carpenter and bumble bees are yellow and black.

Experts at Pestco advise that the abdomen is where the difference lies, as carpenter bees have few hairs on the abdomen, while bumble bees are very hairy and “fuzzy.”

Bombus pennsylvanicus is the name of the species of Sonoran Bumblebee that is known to western Pennsylvania and the Pittsburgh area.

Queen bumblebees along with carpenter bees are the largest bee species found in the United States.

While not as fearsome as the African Honeybee, bumblebees still pose a threat to humans because they tend to build their hives near homes and residences. They tend to nest in sheds, attics, and under patios or decks.

Their stings are extremely painful and are likened to that of a corrosive burn.

In early autumn, dozens of virgin queens are produced within the colonies.

The males patrol territories and mate with virgin females, then die in a few weeks.

The mated queens hibernate and store spermatozoa inside a special sac inside their bodies. These cells fertilize all of the female-destined eggs that will develop in the coming year.

Our unwavering mission has remained the same since our inception in 1948; namely, to provide experienced, responsive and uncompromising service to all of our customers. 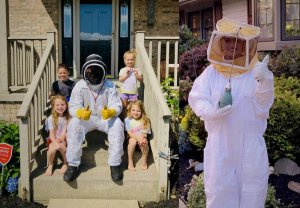 We have provided nearly 75 years of quality family-owned service and are equipped with the most cutting edge and cost-effective pest control strategies.

A supportive and trained staff bolsters our stellar reputation, and we aim to provide the friendliest pest control in all of Greater Pittsburgh!

Our integrated pest management services are cost-effective and safe for the environment because our products are 100% sustainable and our solutions are based upon both biology and the natural life cycle of pests.

The very first thing our highly trained technicians will do is thoroughly inspect a home for vulnerable areas and reinforce them wherever possible.

There is no substitute for professional judgment, since there are some areas in every home that must remain ventilated and open to some extent.

Even if there have been no problems as of yet, there is no guarantee that there won’t be in the near future.

To ensure peace of mind and to concentrate instead on enjoying your home and grounds at this colorful time of year, let Pestco transform your residence into a pest-free, sweet-smelling and hygienic place to both live and visit!