What steps can you take to prevent millipedes from entering your Pittsburgh home or business?

The following are suggestions offered up by our pest control professionals and entomologists. While they will certainly assist in preventing them from entering your home or business, the best defense is to call our teams at Pestco for regular ongoing pest management and pest control — (412) 252-5200

Seal Any Cracks And Crevices In The Home Foundation

Seal around wiring and plumbing where millipedes can easily enter. Don’t forget to check the expansion joints where patios, sunrooms and sidewalks are next to your foundation and also along the walls of the basement.

Repair Any And All Leaks In Your Home

This means any leaks, no matter how large or small, that are found in a home including faucets, water pipes, and air conditioning units.

Use A Dehumidifier To Reduce Moisture

Running a dehumidifier, especially in a basement, can reduce moisture in the air and pest activity because dry air is not conducive to most insect invaders.

This prevent clogs. Make sure gutters, downspouts, and splash blocks are in good working order and are diverting water away from foundation walls.

Keep Your Backyard As Clean As Possible

Remove dead plant matter, piles of leaves or mulch, grass clippings, rotting wood, and woodpiles, especially those that lie directly against the walls of the foundation.

Mow Grass So That It Is Short And De-thatch Lawn

Lawn de-thatching can be crucial to maintaining healthy grass and soil.Thatch is the thick layer of dead plant material that can build up on a lawn, which provides the perfect environment for millipedes. Over watering and over fertilization can cause excess thatch.

Water Your Lawn In The Morning Hours

This allows time for the grass to dry put before nightfall. Adjust sprinkler system to minimize water pooling up on the lawn.

This pest-proofing measure will help to prevent millipede ingress, which is always a better alternative than having to call for outside professional help from the pest-control and pest-maintenance specialists once they gain a foothold in a residence.

Read on to learn more about this little critter, or again, call Pestco for the very best in accredited, friendly and thorough Pittsburgh pest control!

While these long, black critters with too many legs to count may seem to resemble worms, millipedes are arthropods, which means they are invertebrates with an exoskeleton, a segmented body and jointed appendages.

Ranging in size from one-quarter to as long as 15 inches, millipedes benefit the environment because they are detritivores, which means their food choices help to recycle nutrients back into the soil.

They are found in most parts of the world everywhere from back gardens to rainforests, and on all continents except Antarctica.

They have found their way across the globe via humans who unknowingly transported them via the soil found in many plants. 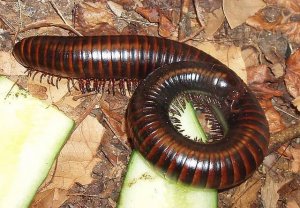 Millipedes have very elongated cylinder shaped bodies and many pairs of short legs, which hamper their ability to move quickly, but they are powerful burrowers.

Their undulating movements make them much slower than their scampering centipede cousins, and they force their way underground head first.

They make their tunnels stronger by rearranging the particles around it.

They have very poor eyesight and we believe that they sense their way around via their antennae, which continually tap the ground in tandem with their movements.

The heads contain a pair of sensory organs just behind their antennae, and are oval shaped. 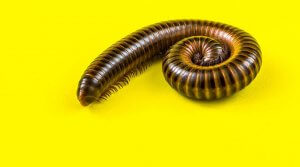 They are used to measure surrounding humidity.

Millipedes are usually found around damp basements, cellars and sliding glass doors and windows because they require damp environments in order to survive.

They must have high levels of moisture or they are likely to die within one to two days inside a home.

They much prefer areas outside a residence, and usually live under mulch, compost, stones and leaf piles.

They are often seen in the spring and fall after long periods of rain or drought.

Similarities and Differences Between Millipedes and Centipedes

Millipedes and centipedes are related in species, and share several characteristics. Both have segmented bodies and belong to the group, Myriapoda.

Both breathe through spiracles, have no direct genitalia and can live up to 7 or 9 years depending on species and have segmented bodies, whose shapes they can quickly alter from spiral to straight formation for protection from predators.

Both arthropods have a pair of antennae that they use for smelling and eating and many species of centipedes and millipedes can be found in bright and dark colors like green, yellow, red, blue, orange and other variations.

Both lay their eggs in the soil with their feces, which form a protective cocoon around them.

They can stay for months in this stage because the soil provides them with sufficient food and moisture.

The new insects seek out smaller ones for food.

Still, Pestco technicians know that they are disparate critters.

Millipede bodies are round, while centipedes are flat with elongated antennae. Centipedes are known for their speed and millipedes move very slowly and burrow. Their leg count is diverse as well.

Centipedes have one pair of legs per body segment, while their cousins have two.

Dietary needs and means of survival are also vastly diverse.

Centipedes are carnivores and kill their prey by injecting them with venom.

They protect themselves from predators by releasing secretions and curling up as a defense mechanism.

11 Rather Interesting Facts About Millipedes

They are fairly low maintenance pets, and with supervision, can be handled even by young children.

Millipedes need a terrarium or enclosure, a good substrate on the floor with moist hiding places such as stones and old wood.

They also require an adequate food supply. Millipedes love moss to eat, live on and hide under, and moist environments.

Adequate temperature and humidity are also crucial to the survival of a millipede.

Despite its moniker which from Latin translates into 1,000 legs, millipedes actually have less.

The millipede that holds the record for the most legs has about 750.

3. Millipedes Have Two Pairs of Legs Per Body Segment

This is one of the traits that differentiate millipedes from centipedes.

All of its body segments have two pairs of legs each while centipedes only have one.

Specifically, the first segment never has legs and segments two through four vary in numbers, depending on the species.

4. Millipedes Coil Their Bodies Into a Spiral When Threatened

A millipede’s back is covered by hardened plates called tergites, but its underside is soft and vulnerable.

Millipedes aren’t fast as are centipedes, so they cannot outrun their predators. Instead, when a millipede feels it is in danger, it will coil its body into a tight spiral, protecting its belly.

Millipedes don’t bite, are unable to sting like centipedes, and they lack pincers to fight back, but some species have stink glands know as ozopores, which emit a foul-smelling substance that repels predators.

The chemicals produced by certain millipedes can burn or blister the skin and it is prudent to wash hands after holding a millipede.

6. Male Millipedes Court Females With Songs and Back Rubs

Female millipedes are not easily seduced because they are often threatened by male advances.

They are known to curl up tightly, which prevents the delivery of sperm into their bodies.

The male millipede is not without his options, as he might walk on her back or attempt to relax her with a gentle massage provided by hundreds of feet.

In some species, the male actually makes sounds like singing or utilizes sex pheromones to arouse a female’s interest.

If a female is receptive to mating, the male uses specially modified legs known as gonopods to transfer sperm. In most millipede species, these unique legs replace those on the 7th segment, which differentiates male millipedes from females. A male will have short stumps in lieu of legs, or nothing at all.

Millipedes are docile and they live rather dull and uneventful lives as decomposers.

Their life cycle involves extended periods of time while both in their immature stages and as adults.

It is estimated that millipedes can survive for up to 10 years in a laboratory environment, but in the wild, life span is difficult to pinpoint.

Inside a home, if they cannot find conditions similar to their preferred habitats, they will not survive much more than 2 to 4 weeks after ingress.

Still, outside help into the form of a reliable pest-control and pest-management company may be needed and should be consulted.

9. Millipedes Lay Their Eggs In Nests

Depending on the species, females burrow into the soil and dig nests where they lay from ten to three hundred eggs at a time.

In many cases, they deposit the eggs on moist soil or organic detritus, build their nests and construct a protective cocoon for their offspring using their own fecal matter.

10. Millipedes Were the First Animals to Live on Land

that millipedes were among the earliest of living things to breathe air and move from water to land.

Millipedes are known to be very clean about their bodies and they spend a great deal of time and attention on cleaning and polishing various parts of their bodies. They are even equipped with a unique brush-like group of hairs on the 2nd or 3rd pair of their legs, which they use to clean their antennae.

Get The Very Best In Pittsburgh Millipede Control!

We are a five-star, family-owned company and have a stellar reputation for superior customer service that dates back more than seven decades to the years following World War II.

All of our pest control tactics include skillful monitoring as part of an overall solution, which also entails the careful application of approved insecticides, providing a unique, holistic approach to pest-control and pest-management operations.

Our integrated services are cost-effective and safe for the environment because our products are 100% sustainable and our solutions are based upon both biology and the natural life cycle of pests. 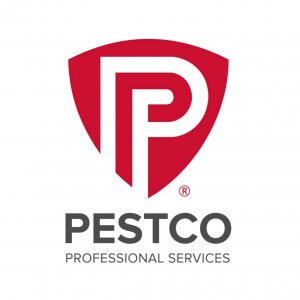 Our highly knowledgeable technicians attend company workshops to ensure they are always a few steps ahead of the pests they encounter.

Our pro-active approach entails an extensive and thorough examination of the affected home and the sealing up of any cracks and crevices that might permit insect ingress.

Our pro-active pest exclusion services are geared to the selection of appropriate products, which will vary in how well they can withstand specific pest invaders.

If you own a home or business anywhere throughout the Greater Pittsburgh area and its environs, call our teams today, and let us help you with our tried and true, state-of-the-art pest-control and pest-management solutions.