What steps can you take to prevent centipedes from infesting your Pittsburgh home and/or business?

Well, they are as follows.

However, it’s important to note that once centipedes have established a foothold in any Alleghany County interior, the best advice in dealing with them is to call upon professional help, namely us – (412) 252-5200, for the most thorough, most friendly and most qualified Pittsburgh centipede control and extermination services!

Read on to learn more about this obnoxious, creepy crawling insect, or contact our teams today!

A Brief Overview Of House Centipedes

The small critters with many legs that Pittsburgh homeowners and business owners spot scampering across their floors in basements and attics are not so surprisingly known as house centipedes, and they were first recorded in Pennsylvania in 1849.

While their origins are linked to the Mediterranean region of the world, this species has scampered all across it, and in some countries they can grow to be up to a foot in length.

They reside in homes filled with screaming women and frightened pets, and are often the source of many complaints our pest specialists hear from our local community. 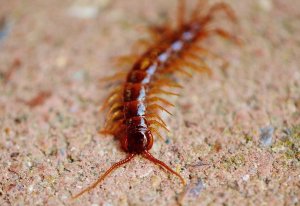 In 1902, an entomologist named C.L. Marlatt, who worked for the United States Department of Agriculture, wrote about the house centipede in Circular #48:

“It may often be seen darting across floors with very great speed, occasionally stopping suddenly and remaining absolutely motionless, presently to resume its rapid movements, often darting directly at inmates of the house, particularly women, evidently with a desire to conceal itself beneath their dresses, and thus creating much consternation.” 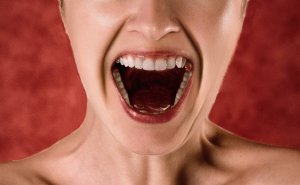 Centipedes are yellowish to dark brown color and sometimes have markings or stripes across their elongated, flattened bodies.

Adults have 15 pair of legs with the last pair (on females) nearly twice the length of the body, which is one to one and one-half inches in length.

This renders the illusion that the centipede is almost twice its actual size (from three to four inches in length (including legs and antennae).

Due to their secretive nature, scary appearance and darting motions, homeowners typically fear the house centipede.

Their many legs are a bit creepy, and their long antennae resemble claws. A pair of legs often trail the body, adding to the surreal appearance of this creepy crawly.

The house centipede can be found in many buildings throughout the United States.

Life History and Behavior Of Centipedes

Females can live for a few years and produce a maximum of 150 offspring.

Daylight hour find them lurking in dark, damp spots such as cellars, and nighttime brings them out to forage for prey. 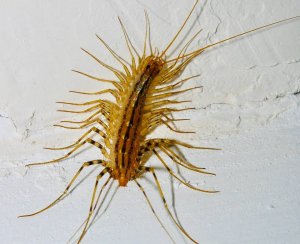 Inside, they seek cover in a variety of places. These include: beneath concrete slabs, which they enter via expansion cracks and sump pump openings; inside cement block walls that are missing mortar and around pipes; in floor drains without water traps (especially drains that are connected to dry sumps) under and inside cardboard boxes that are stored on slabs and crawl spaces under the house.

House centipedes feed on other insects and small arthropods.

They have poison glands and the means to inject their venom into their prey, but they aren’t easily able to puncture the skin of a human and bites are infrequent and normally do not cause more than temporary, localized pain.

While they don’t cause or carry diseases like other insects and Pittsburgh rodents, they can be very distressing to have around.

One Pennsylvania newspaper reported the story of a woman who found one crawling inside her shoe just as she was about to slip it on!

Are Centipedes Prevalent Throughout Pennsylvania?

They are. The Pennsylvania house centipede is known as Scutigera coleoptrata. It cannot survive winters outdoors, but easily reproduces in heated structures.

They are unique in the sense that they are able to complete their entire lifecycle, from egg to old age, indoors. 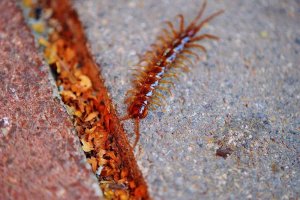 Despite their scary appearance, house centipedes are somewhat beneficial. They are insectivores that kill and eat other arthropods, such as insects and arachnids.

If these centipedes are seen frequently in a Pittsburgh residence, it might be time to call pest-control and pest-management specialists, as this is usually an indication that some food source is in abundance, which may further signify a greater problem then the presence of centipedes.

A Few Interesting Facts About Centipedes

The following represent some little known facts about these creepy crawlies.

This will not necessarily make a home-owner feel any better about having them scattering across the floors in his or her home, but they do, nevertheless, offer some food for thought.

1. The Meaning Of The Name

The Latin meaning is”100 legs,” but this moniker is not completely tr

Centipedes have one pair of legs per body segment, but they can never have exactly 100 legs because they always have an odd number of body segments.

Numbers can fall anywhere from 15 to 177 pairs of legs, depending on the species.

2. There Are An Estimated 8,000 Species Of Centipedes

Centipedes live all over the world and have even been found as far north as near the Arctic Circle!

They are extremely diverse and range in size from 0.4 inches to as large as 10 inches.

Their colors vary from dark brown to red and white, among others. Some species are solid, singular colors while others are multi-toned.

3. Centipedes Date Back To The Ancient World

Centipedes are among the oldest animal groups in the world as attested by uncovered fossils that date back some 430 million years ago.

They were among the first critters to crawl out of the ocean and survive on land.

Due to their many legs, segmented bodies and the lack of a waxy coating, house centipedes can move rapidly.

They rely on speed for catching their prey and escaping predators. The have been known to reach paces of up to 1.3 feet-per-second!

5. They Are Nocturnal Creatures

Centipedes aren’t usually seen during the daylight hours, and our pest-control and pest-management specialists at Pestco know exactly where to seek their source, which is usually the damp areas in bathrooms, basements, and laundry rooms.

It is common for home owners who have centipedes to not notice them for a long time.

According to Steve Jacobs, an urban entomologist at Penn State University’s College of Agricultural Sciences:

“During the daytime, the centipedes inhabit dark, damp locations in the home and come out at night to forage for prey. House centipedes feed on silverfish, firebrats, carpet beetle larvae, cockroaches, spiders and other small arthropods.”

Some species of centipedes are very protective of their offspring.

Females will wrap themselves around their eggs to protect them from predators until they hatch and they have been known to clean the eggs to prevent them from growing fungi.

Others stay with their progeny until they are are ready to go off on their own.

Their life spans vary depending on species. Some only live for a year or so while others can thrive for as long as 5 or 6 years.

Centipedes molt as they grow, developing more pairs of legs at each molting.

This translates into the fact that the the older they get, the more pairs of legs they have.

8. They Can Regrow Legs

Centipedes can regrow legs that they lose to predators.

When captured, they are known to detach some of their legs in order to escape.

A few molts must occur for the legs to grow back, which explains why some legs may be shorter than the others.

9. Centipedes Are Not As Waxy As They Appear

Centipedes are unique arthropods, as most members of their ilk have a waxy coating to hold in moisture.

This is not a disadvantage, however, as it is the reason they prefer dark damp areas. In addition, as mentioned before, the absence of a waxy layer permits them to move more quickly.

The first pair of legs on a centipede serve as pincer like appendages and are not used for walking.

These modified legs, which are known as forcipules, are venomous and are used for capturing prey and paralyzing it.

They don’t usually bite humans, and their venom rarely causes harm even when they do.

We are a Quality Pro-Certified, 5 star-reviewed Pittsburgh enterprise that has been owned and operated by the same family for more than seventy years. We offer the most advanced and cost-effective pest-control and pest-management solutions found anywhere today.

While we’re conveniently located just on the outskirts of the city, Pittsburgh has always been at the center of our lives and operations, even though our services extend throughout Western Pennsylvania and other environs.

Fully integrated and uncomplicated, our professional services are all performed by expert technicians.

One of our most effective solutions concerns a pest exclusion policy, which addresses the fact that it’s much easier and safer for the environment to keep pests out of any space than it is to eradicate an infestation once it takes hold.

Pest exclusion is a first line of defense against infestations, but it is only one of the many cost-effective services we offer.

Our products are 100% sustainable and our solutions are based upon both biology and the natural life cycle of pests.

So, call our teams today and say goodbye to creepy crawlies forever!