They invade homes while foraging for food, and like some other insect species, are opportunists, eating almost anything they come across. This includes: honeydew from aphids, nectar, fruits, seeds and insects.

They will also gorge on most household foods, including: meats, grease, bread, cheese and ice cream. Outdoors, they prey on subterranean termites, insects in the soil and plant juices.

When large groups infest a kitchen or garden patio, they can be a significant nuisance, and professional help from our pest-control and pest-maintenance specialists should be called upon immediately — (412) 252-5200.

Their legs and antennae are paler in color, and their heads and thoraxes feature grooves (parallel lines). 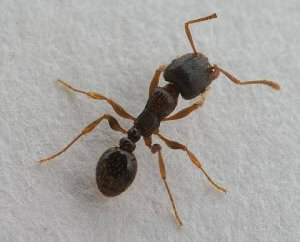 They are distinguished from other ant species by their large heads, two spines on the back and two nodes on the petiole, which is the slender stalk that separates the abdomen and thorax.

While their presence in the United States is a well known fact, much less is known about their invasive behavior than other ant species.

Their origins are a bit clearer, and are believed to date back to colonial America and merchant cargo ships that inadvertently transported them from Europe during the 16th and 17th centuries.

These vessels were filled with soil, which provided the necessary weight (ballast) for the overseas voyage. Once docked in port, the soil containing the hitchhiker ants was removed and replaced with goods to carry back to Europe across the Atlantic. 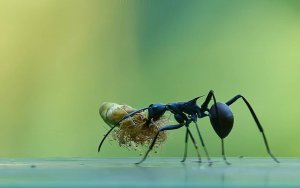 Pavement ants have the distinction of being the most commonly encountered by Pennsylvania home owners.

Although these ants do nest indoors, particularly inside walls, insulation and even under floors during the colder months of the year, their preferred habitat is outdoors, under stones, along curbs or in cracks of pavement, which is how they got their namesake. 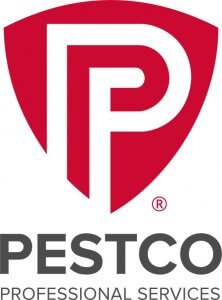 The Damage Pavement Ants Can Cause

Pavement ants are considered a nuisance and may cause unnecessary stress when they invade, but they do not pose the threat to human health and property that some other insects do.

They can, however, contaminate food by leaving waste behind.

Due to the fact that this species excavates soil between bricks and blocks to construct their nests, they have been known to cause aesthetic damage to walkways, driveways and patios by creating unsightly ant hills between the cracks in the sidewalk, sides of a driveway, and around a home’s foundation.

They are not destructive to the structures themselves because they do not nest in or eat wood.

1. Neighboring ant colonies are aggressive and known to have large battles on the sidewalk in the spring, which often result in hundreds of ants left to die on the battle ground.

2. A single nest of pavement ants can hold as many as 10,000 workers and several queens.

3. According to the University of Nebraska Extension Service website, pavement ants are highly attracted to peanut butter-based baits. Big-headed species, such as the pavement ant, often fall prey to this type of poisoning.

4. This species is also known as the Immigrant Pavement Ant and the Sugar Ant in parts of North America.

5. Pavement ants do have a sting, but it is not strong enough to damage human skin.

6. Pavement ants use a chemical trail to direct others in the nest to a food source, which can often lead as far as thirty feet.

7. This species is known to forage mostly at night, but during early spring and summer they also seek food sources during daylight hours.

8. Pavement worker ants are known to live up to five years, while male ants only for a few months. It is not know specifically how long the queens can live, but experts believe that their life span may even surpass that of worker ants.

9. If a pavement ant nest is situated next a heat source, home owners are in trouble because mating season will then occur all year-round. If this happens, the pest-control and pest-maintenance specialists at Pestco should be notified immediately.

10. Pavement ants are extremely territorial critters, but this particular aspect of their nature has not been extensively explored.

How Do I Protect My Home From Pavement Ants?

This can be very challenging because the entire population cannot be eliminated without the identification of the nest.

In addition, most of the do-it-yourself pavement ant treatments and products that are sold over the counter are not effective, and may contain pesticides that can be more harmful to people and pets than the ants.

The use of residual sprays only serve to stress the colonies, causing them to fracture, split into sub-colonies and scatter. This process, which is known as budding, actually multiplies ant colonies and exacerbates the original ant problem.

Contacting our pest-control and pest-management specialists at the first sign of ants in a home is the most effective way to resolve pavement ant problems.

That said, there are some preventive measures homeowners can take that may help the situation.

For those living in or near Pittsburgh, PA, these tips should be used in conjunction with year round pest-control and pest-management services. 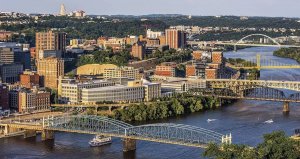 1. Eliminate All Standing Water Near The Home

Pavements ants, as well as mosquitoes and termites, are attracted to moisture. Reducing its levels in and outside a residence is critical to preventing access to property.

Be sure to keep standing water, including that left from hoses or around flowerpots, to a minimum.

Grade soil away from the house so that moisture does not collect against the foundation or siding.

2. Seal All Cracks And Crevices

Caulk all gaps found around windows and doors.

The use of appropriate sealants where ants might gain ingress is a very important step, especially near a heat source, such as a hot water heater, air conditioning condenser, furnace, or even on the southwest-facing side of a residence that is warmed by sunlight.

3. Do Not Stack Firewood Near The House

Although they prefer nesting under sidewalks, pavement ants colonies can be found under almost anything lying on the ground including: stones; logs; boards; bricks and patio blocks.

The have also been known to utilize firewood as nesting material.

4. Clean Your Gutters As Regularly As Possible

Removing accumulated leaves and debris that can clog the downspout and making sure that water from the downspout is directed away from the house at the base helps to make gutters unattractive havens for pavement ants.

5. Cut Back Plants And Tree Branches

Trimming back trees, plants and bushes away from the outside of a home will prevent pavement ants from using their branches to gain easy entry. Create a gap of six feet or more, as this distance will also help reduce problems with other pests as well, such as squirrels and mice.

6. Keep Food Items Secured And Pet Food Off The Floors

Never leave food out in the open on kitchen counters or pet food on floors. Store them instead in sealed containers or in the refrigerator.

We are a family owned, five-star company that has been in continuous operation for more than seven decades, and the city of Pittsburgh has been at the core of our operations since our inception back in 1948.

While we serve many diverse industries that range from restaurants to nursing homes; hotels; factories, hospitals and office buildings, just to name a few, we also provide the friendliest and most effective pest control and pest management services to Pittsburgh homeowners.

The very first thing our trained technicians at Pestco will do is thoroughly inspect the home for vulnerable areas and reinforce them against invading payment ants.

There is no substitute for their professional judgment since there are some areas in every home, such as air currents, that must remain ventilated and open to some extent.

These can be very alluring to pavement ants, as they feature seasonally appealing temperatures (cool in the summer, warm in the winter) and they can carry the scent of food being prepared inside.

Pest exclusion is a first line of defense against infestation. It s a pro-active tactic that involves sealing up potential points of entry.

Our main selling point concerning the incorporation of such a policy is the fact that it’s much easier and safer for the environment to keep pests out of a space than it is to eradicate an infestation once it takes hold.

Even more, our integrated pest management services are cost-effective and safe for the environment because our products are 100% sustainable and our solutions are based upon both biology and the natural life cycle of pests.

Let our experts transform your Pittsburgh home into a pest-free residence!