Along with tales of alligators inhabiting dark and dank urban sewers, there is also an enduring myth that cockroaches can survive a nuclear explosion.

While no human would ever be on hand to verify this allegation after such a cataclysmic event, it is true that cockroaches are well known for both their resilience and ability to breed rapidly.

They pose a definite health risk to humans and are vectors of dozens of dangerous pathogens including E.Coli and salmonella.

Perhaps most disturbing is the fact that researchers have recently discovered that German cockroaches (Blattella germanica L.) are developing a cross-resistance to a an entire range of insecticides, which means that offspring are born already impervious to toxins that they haven’t even directly encountered.

It is not at all unusual for insects to develop resistance to at least one kind of pesticide, but if that is the case, they usually will succumb to another.

Roaches evolve quickly and only live about three months.

Those that develop a resistance pass the gene down to future generations.

Put another very grim way, the roaches are winning in their battle with exterminators.

German cockroaches are small and very prolific. They breed continuously with many overlapping generations present at any one time.

A female can have as many as 50 offspring every three months and one female and her offspring can theoretically produce up to 10 million descendants over four generations within 12 months! 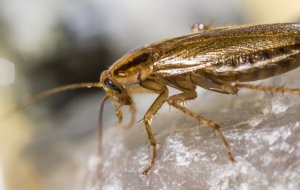 While scientists once believed that the German cockroach originated in Europe and then a bit later in northeast Africa, modern research places their beginnings somewhere in southeastern Asia.

Their habitat is anywhere people are found.

According to the University of Florida’s Department of Entomology and Nematology, “This is the species that gives all other cockroaches a bad name.” They are quickly evolving resistance to a range of pesticides and may soon be nearly impossible to kill with chemicals alone.

The survival of the German cockroach is greatly hampered by cold temperatures.

Studies have indicated that the species is unable to colonize inactive ships during cooler temperatures and cannot survive in homes without central heating in northern climates.

The availability of water, food and shelter also determine their ability to establish colonies.

Typical favored locations are the cracks between cabinets and walls, the flange under the kitchen sink, and the space between door corners and jambs.

The darker the better when it comes to sustainable environments for the German cockroach. Cupboards, pantries and all kinds of cabinets are perfect.

They are also very attracted to grease accumulation that is often found around and under grills, stoves and fryers.

German cockroaches contaminate food and food products with their feces and secretions, and are vectors of pathogenic organisms that can cause severe allergic reactions.

Their feces and shed body parts carry allergens that can trigger asthma. In the case of heavy infestations, they have even been reported to bite humans and utilize their sleeping faces as surfaces like tables to eat upon. 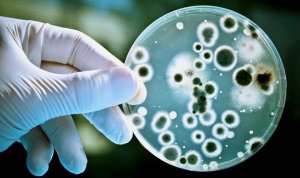 Some scientists believe that German cockroach infestations can be source of psychological stress that actually alters human action.

Avoiding the kitchen area at night for fear of coming across a cockroach or having friends over less frequently after discovering an infestation are common avoidance behaviors.

Researchers at Purdue University in West Lafayette, Indiana, conducted a new study funded by the United States Housing Department that indicated that the German cockroach is becoming harder to kill because it has developed a cross-resistance to multiple types of insecticide at one time.

The findings were published online in the June, 2019 journal, Scientific Reports.

According to Michael Scharf, the study’s lead author: “This is a previously unrealized challenge in cockroaches. Developing resistance to multiple classes of insecticides at once will make controlling these pests almost impossible with chemicals alone. Ridding urban homes of these pests will require strategies more complex than just chemical treatments.”

For the study, they tested the effects of three different rounds of insecticides on roach populations in these buildings over a six month period.

They exposed one group of roaches to a single insecticide.

Then a third was treated with rotations of three insecticides: one per month, for two three-month cycles.

After the third rotation of insecticides, the research team tested the surviving cockroaches and discovered that they were able to develop a cross-resistance to multiple insecticides, even if they hadn’t been exposed to all of them and didn’t have previous resistance.

That same chilling fact was true for their offspring.

While the team did succeed in maintaining flat levels of roach populations by rotating three insecticides, they were unable to reduce the numbers.

Even when the researchers used multiple insecticides at once, a technique exterminators often employ, the population size did not drop.

Before this study, most experts believed that cockroaches only developed a resistance to one class of pesticide following exposure.

According to Scharf: “We would see resistance increase four-or six-fold in just one generation. We didn’t have a clue that something like that could happen this fast. Cockroaches developing resistance to multiple classes of insecticides at once will make controlling these pests almost impossible with chemicals alone.”

A residence can be infested in the living room but not the kitchen.

Or they can be seen moving out in the open in bright light.

They can also be found outdoors in the lawn and adjacent shrubbery.

This is the reason why during an outbreak the pest control and pest management specialists at Pestco expand their search for cockroaches into adjacent rooms above and below the obvious site of infestation.

These Roaches Will Eat Anything

They will eat almost anything they can find including: hair, glue, soap, and toothpaste.

Similar to other insects that have an incomplete metamorphosis, the German cockroach has three life stages: the egg; the nymph and the adult.

It takes from six weeks to six months to reach maturity.

The Egg Case Of The German Cockroach Contains Many Eggs

Female cockroaches protect their eggs by placing them into a thick protective case that is called an oothecal.

One female can place 40 eggs in one case. and she can carry the egg case for as long as a month, dropping it just before it hatches.

Within a given room, cockroaches will be concentrated in areas such as above refrigerators and other heat-generating equipment, under the sink, and around water pipes.

These roaches have a sticky pad on their feet, which is called an arolium. This permits them to climb surfaces that are smooth.

This characteristic, which is known as aggregation, can be both a boon and a problem for the trained Pestco technicians called to the scene.

If an aggregation is overlooked, the infestation will continue, but on the other hand, the fact that they clump together as a unit can make their telltale brown spotting easier for a home owner to detect.

These sites are excellent locations for the application of residual insecticides or baits.

They Spend Most Of Their Lives Hidden And Protected

For every cockroach seen in daytime, hundreds more are likely be hidden inside wall and ceiling voids, behind cabinets and inside appliances. A favorite location for the German cockroach is inside a narrow crevice with its antennae extended out.

The Food Industry Is Very Vulnerable To Infestations

They can occur even in perfectly clean kitchens and immaculate food processing plants.

The roaches gain ingress to a facility via food delivery containers such as beer cases and cardboard boxes.

Commercial kitchens are also ideal habitats to live in and breed because they provide warmth.

The German Cockroach Is Associated With Asthmatic  Symptoms

Studies have made a direct connection between asthma symptoms and the presence of cockroaches, but German cockroaches stand out from all the other species.

They are the leading cause of asthma among inner-city children in our country.

Researchers recommend an “integrated pest management” approach as the most effective way to reduce populations, such as combining chemical treatments with traps, improved sanitation and bug vacuums.

Most insecticides do not have the ability to penetrate the egg case of the German cockroach even if they are directly applied.

The unaffected egg cases will hatch days after treatment and this is why follow-up treatments with the pest management and pest control experts at Pestco are vitally important.

Our entomologists, researchers and technicians are backed with seven decades of research, on-site experience and refined insecticidal know-how in deterring, preventing and exterminating this invasive insect.

We are a family-owned and operated five-star Pittsburgh organization that has been in continuous operation since 1948.

Our technicians are highly trained and obligated to attend workshops on a regular basis so that they are always one step ahead of the pests they are trained to eliminate.

We are always aware of the latest innovations in both products and methods to combat pest infestations of all kinds.

We are here to provide long-term pest control, exclusion services and protection against any type of pest infestation in any kind of residential, commercial or industrial space.