Spiders are known as arachnids because they differ anatomically from other insects.

Their legs number eight instead of the usual six and their bodies are divided into two segments rather than three.

They are extremely diverse critters and range in size from a speck of dust to that of an entire human face.

Their highly developed skill in the use of silk also sets them apart from other insects.

They are found in many habitats that include: deserts; in the tropics; freezing Siberia and even underwater!

All spiders are predators.

They feed almost entirely on other insects. Some species are active hunters and inject venom for the purpose of quick immobilization of their victims, while others intuitively weave silken traps to capture prey.

Another trait all spiders have in common is that they all have jaws and fangs that are designed to bite and deliver venom to their prey.

However, in the case of most species, their jaws and teeth are too small to puncture human skin.

Do-it-yourself remedies do fall short here, as spider control is a multi-layered process that includes a home inspection, accurate identification, prevention and mechanical measures if necessary.

A reliable and highly skilled pest control and pest management company such as ours is the best way to solve the issue of present and future spider infestations.

So if your a homeowner, or even a business or commercial property owner, read on to learn more about the four types of spiders to watch out for throughout Allegheny County (in rare occurrences the Brown Recluse), or reach out to our teams today to protect against any spider-related infestation! (412) 252-5200

Spiders That Crawl About Pittsburgh Homes

The most common species of arachnids known to the Pittsburgh area and its environs are: the Cellar Spider (AKA Daddy Long Legs); the Brown Recluse Spider; The Wolf Spider and the House Spider. Below is information on each of these.

First discovered in 1850, this family of spiders contains over 1800 species divided in 94 genera. Approximately 20 species are found in the United States and Canada.

The body proportions render the appearance of these spiders a bit unnatural and disturbing to behold. Their legs are very elongated and thin when compared to other arachnids and despite their unpleasant appearance, they are not venomous and pose no threat to humans. 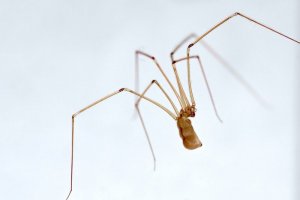 Pittsburgh home-owners should know that Cellar spiders construct loose, irregular webs in dark and damp places, including but not limited to the corners of eaves, windows and ceilings in cellars, crawlspaces and garages. Cellar spiders have their own idiosyncrasies.

They wait patiently for their prey to pass by (other spiders and insects) while hanging upside down in their webs.

They also do not clean out their webs or reuse them. Instead, they layer additional new webs on top of the older ones, making them cumbersome, hard-to-miss eyesores in homes and buildings.

According to Penn State’s Entomology Department: “Brown recluse spiders are not native to Pennsylvania but several  isolated occurrences have been reported.

They can be easily transported in boxes and similar items from a locale where the spiders normally occur.”

Brown Recluse bites can be very serious, and are often overlooked because the initial bite is painless. 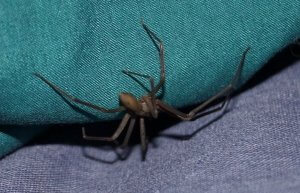 The symptoms arising from the bite of a Brown Recluse Spider include: chills, fever, bloody urine, fatigue, jaundice, pain in the joints, nausea, rash, and in extremely rare cases, convulsions and death.

These small arachnids range in size from a quarter of an inch to an inch in width.

Their chocolate brown color and the distinctive violin-shaped pattern on their backs make them easily recognizable.

While rare, it wasn’t too long ago that an elementary school in Franklin County, Pennsylvania was forced to close due to a Brown Recluse Spider invasion.

Wolf spiders can be identified by the thick coat of fine hair around their body, perhaps revealing why they are so named.

They are a bit larger than their Recluse brethren and their colors range from brown to gray.

They lack any specific patterns on their backs and while they are venomous, their bites are not as harmful as that of the Brown Recluse. 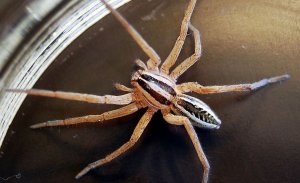 Pennsylvania is home to two of the biggest species of wolf spiders that are known as H. carolinensis and H. aspersa.

They can measure in size anywhere between 18 and 35 millimeters in length and are usually found outside residences in the soil, and in between boards, rocks and stacks of firewood.

They are nocturnal critters and will bite humans if they are handled or inadvertently trapped between clothes.

Their venom does not cause a serious reaction in humans and normally results in short-lived pain and redness.

The most common spider found indoors in Pennsylvania is the house spider (Achaearanea tepidariorum).

These insects are light gray in color and small, usually measuring no more than than a quarter of an inch.

House spiders randomly select locations for their webs, but they can usually be found near air currents, which serve as passage-ways for prey.

Homes with higher levels of humidity are very attractive to these spiders.

They are sometimes found outside a home under eaves or around windows where light attracts prey. 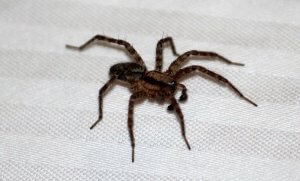 House Spiders do bite, and although the aftermath  can be painful and last for up to 16 hours, their venom does not cause serious harm or spread disease to humans.

Still, a House Spider infestation in any Pittsburgh home can be problematic and require professional help from our pest control and pest management specialists to resolve.

House Spiders in a home means they have found a food source which translates into the uncomfortable fact that other insects have found a haven in your residence as well.

Another rather disturbing fact that could keep faint-of-heart homeowners awake at night concerns how House Spiders reproduce.

Any given House Spider egg sac can hold up to 300 eggs, and a single female House Spider can produce up to 20 egg sacs in her lifetime!

Some Fascinating Facts About Spiders

The following list represents part of a research project conducted by biologist, Stefano Mammola of the University of Turin and his colleagues.

These and other spider facts were recently published in a publication in the open-access journal, PeerJ which, is well known for highlighting primary research and  reviews in biology and life sciences.

There Are More than 46,700 Species of Spiders

Spiders are found all over the world.

Some Spider Species Are Named After Celebrities

Researchers and students from the University of Vermont have discovered a new group of six species of spiders in the Caribbean.

This group is characterized by markings, which resemble a happy face.

They have been named after some pioneers of human rights and climate change. They are: Spintharus davidattenboroughi; S. barackobamai; S. michelleobamaae; S. davidbowiei; S. leonardodicaprioi; and S. berniesandersi. There is also one species, Spintharus skelly, named after a pet cat.

The largest fossil spider ever found is the Mongolarachnidae jurassica which hails from the middle of the Jurassic period, some 163 million to 174 million years ago. The species was discovered in Mongolia, China, and had a body length of 7 inches and legs up to 2.4 inches!

The Smallest Spiders In The World

Patu digua is the smallest spider on record.

It measures 0.01 inches (0.37 millimeters) in total length, and is so small that it is difficult for scientists to study.

Ordinary microscopic tools are insufficient and researchers must resort to high tech solutions such as scanning electron microscopy.

The Spider Most Dangerous To Humans

The venom from Australia’s Sydney Funnel-Web Spider (Atrax robustus) can kill a human with a mere 0.2 milligrams of venom per kilogram of the victim’s weight.

The Darwin’s Bark Spider ((Caerostris darwini) spins huge webs that can spread across the expanse of large bodied of water including rivers and lakes.

They serve as trawls for insects that move over the water.

The numbers are amazing as a single web can be up to 30 square feet in area and some 82 feet across!

A 2010 study revealed that these particular webs are comprised of a spider silk that that is twice as stretchy and tough as as other spider webs.

Amazingly, it was found to be also 10 times more resistant than Kevlar to breaking from stretching.

The venom of the Phoneutria genus of Brazilian wandering spiders is capable of killing a human in part because of the size of their venom glands, which can be as large as 0.4 inches by 0.1 inches.

Due to the fact that these spiders are not known to inject all their venom at one time, the chances of a fatality are low.

The Spider Species That Lays The Most Eggs

One spider species, the Nephila pilipes, which is found in Asia and Australia, can lay more than 3,000 eggs at one time! According to a research study published in the journal, Oikos, numbers can get as high as 9,700.

The Heaviest Spider In The World

The Goliath Bird-Eater, (Theraphosa blondi) is the the most massive spider on the face of the earth. They can grow as large as 6 ounces with a leg span up to 1 foot.

Their bodies are large enough for them to devour birds.

They are ground hunters with a diet consisting mostly of big earthworms.

They have, however,  also been known to eat frogs and other insects.

An Australian Trapdoor Spider (Gaius villosus) lived to be 43 years of age. Known as Number 16, she was part of a research project that started in 1974.

Scientists believe her death in May of 2018 occurred when a parasitic wasp broke into her burrow.

It all began in 1946 with the dream of a Lithuanian immigrant named Milton Zlotnik. He first learned about pest control while serving in the United States Army during the turbulent years of World War II.

After the war, he became the first distributor of an ingenious new product invented by Milt’s wife’s (Mimie’s) brother, Bob Surloff, who invented the world’s first fan-operated air freshener dispenser which he named, Air-Scent.

Milton began to take notice of the fact that his commercial customers often asked him if he offered any other services in addition to the servicing of professional air fresheners.

Soon, the idea popped into his head from his US Army exterminating experience to add pest control as an additional service.

In 1948 he officially launched Pittsburgh Exterminating Service and Termite Control (which later became Pestco Professional Services) from his home, which he shared with wife, Marion (Mimi), who also worked for the company.

The rest, as they say, is history, and we remain both a leader and pioneer within the pest control and pest management industry to this day.

Our knowledgeable and highly trained technicians are at the top of their game and guarantee results for any residential infestation.

Turn to our red shield for protection from these and any other creatures that might be lurking about your home or business!

I don’t want to alarm you, but you’ve got a spider the size of a Buick behind your bathroom door. ~ Woody Allen, Annie Hall

Zombie insects! Oh my! In honor of the upcoming Halloween holiday, here are 7 zombie insects that give new meaning to Mother Nature’s serial killers! Whether you are on a diet or not, reading this piece does not fare all with either appetites or appetizers …

Why September Brings Out The Worst In Stinging Insects

Are you seeing more and more critters with stingers drifting across your property and causing significant consternation among family members? No, it’s not an unpleasant, painful mirage. While it might …

10 Tips To Help Protect Your Home From Pantry Pests

Pantry pests is a most unimaginative moniker for insects that like to hang out in your pantry. Also known by the equally humdrum name, Stored Product Pests, these critters have an insatiable appetite …