While making mountains out of of molehills may stand as a meaningful idiom, real molehills are nothing to sneeze at, and, on a beautiful, well-manicured lawn, they are heart-breaking for a Pittsburgh home owner to behold.

Moles love lawns that have loose, moist soil because it allows them to dig easily. Voles attack plants and shrubs.

Both of these critters can cause a great deal of damage and home owners should not hesitate to seek outside help from our pest-control and pest-management specialists if they have gained access to a property. 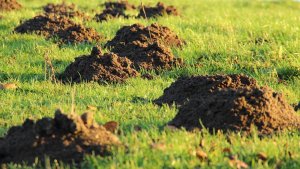 What Exactly Are Moles and Voles?

Moles resemble mice and rats, but they are not rodents. Rather, they are insectivores and more closely related anatomically to bats.

They are 4 to 7 inches in length with paddle-shaped feet and prominent digging claws.

As far as what humans can see, a mole’s face is just a nose and a mouth. Their heads and snouts are elongated, and while they do have small eyes and ears, they are buried beneath the fur, which keeps dirt out out of their eyes.

Their short black-to-brownish-gray fur has no grain, which allows them to move easily forward and backward in the tunnels.

Moles can survive underground with low levels of oxygen and high levels of carbon dioxide due to unique adaptations in their hemoglobin. They are also among a few of Mother Nature’s species that can actually smell “in stereo,” which means they are capable of not only detecting odors immediately, but also can determine from which direction they are traveling.

This is a great natural advantage because it allows moles  to quickly and accurately locate food and predators.

These pests are known to dig into shrub beds and lawns and to work at the astounding rate of 18 feet per hour, which can add up to 150 feet of new tunnels in a single lawn each and every day!

They are expert diggers and can consume from 60 up to 100% of their body weight. This figure breaks down to a 5-ounce mole eating 50 pounds of prey annually.

Voles are rodents that look very much like field mice with short tails. Their bodies are compact and heavy, their eyes button-like and their ears partially hidden. 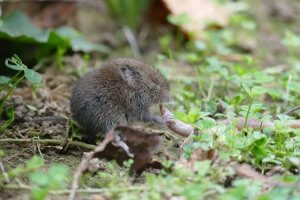 Voles are 5 to 8 inches long and have bulging orange teeth, which serve them well in gnawing plant roots and stems.

Voles are known to gnaw at the base of trees and shrubs during the colder months of the year. They also damage flower bulbs and garden grown potatoes as well as the stems and blades of lawn grass.

Their presence is often marked by the tell tale runways they leave behind.

Voles can also accidentally damage trees and shrubs by burrowing into their root systems, which can cause young trees to suffer from excessive leaning or die-back (a condition in which a tree or shrub begins to die from the tip of its leaves or roots backwards).

Other Differences Between The Two Species

Moles are solitary, live underground in tunnels and are predatory in nature. They are meat eaters and thrive on earthworms and other insects.

Voles on the other hand, which are sometimes known as meadow mice, are social, vegetarian, and their diet consists of the roots and stems of plants found in low-lying or creeping vegetation.

They are among the opportunists of the critter world, as they are known to dig golfball-sized holes in tunnels previously created by moles.

Mole And Vole Damage And Control

Healthy lawns face many threats in early spring and they are vulnerable to moles and voles that can destroy the grass by building tunnels in your yard. 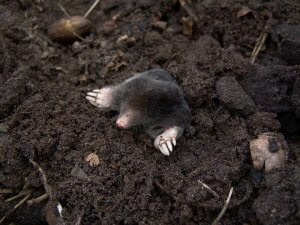 Volcano-shaped mounds are evidence of mole intrusion while voles leave their tell-tale trail in the form of visible cracks or crevices in the grass. These tunnels allow them to seek food under cover, so to speak.

Voles are active day and night and always hungry, which is bad news for that well-tended lawn. They are harder to control, more destructive and extremely fertile, but in their own way, symbolize both the destruction and rebirth of nature’s cycles of life.

The most effective means to control mole and vole infestations is to contact our pest-control and pest-management specialists at Pestco Professional Services — (412) 252-5200.

They can provide solutions for the harried homeowner and strategies for both dealing with the issue here and now and avoiding future infestations.

Interesting Facts About Moles and Voles

Moles and voles have a proper place in the natural order of things and therefore our efforts are always focused on repelling rather than exterminating them from a property.

The tunneling of moles loosens soil and aids in aeration. They also eat many garden insects and their larvae.

This will help to eliminate their food sources and their natural protection from predators. Moles love to eat grubs and by eradicating them from a property, a lawn can possibly be saved.

The one caveat is that grub treatments are not environmentally-friendly choices because they affect the food supply for other wildlife. Also moles will seek out another food source, such as insects and earthworms.

If a home owner feels damned if he or she does or doesn’t, its is time to call upon pest-control and pest-maintenance specialists for more stable and permanent strategies

Sprinkle The Lawn With A Vole Deterrent

This can be effective but also a bit tricky if there is nothing to stop voles from re-entering a property. If trees are damaged, wrap the base with a tree guard to prevent pests from ripping and biting at the bark.

Create Vertical Barriers Made Of  Rocks And Wire Mesh

A single mole in a vegetable garden creates a double risk. There is the initial damage it will inflict coupled with the chance of voles using mole tunnels as a conduit to reach and consume crops.

Homeowners can create a barrier by digging a trench two to three feet deep around the perimeter, and filling it with rocks or wire mesh.

If a homeowner opts for wire fencing, he or she should be certain that it extends at least two feet into the dirt and 6 to 12 inches above ground to prevent voles from burrowing underneath it.

It should be stated this method can work well, but is labor intensive  for areas larger than most gardens. Individual bulbs in the ground can also be protected by building small wire cages around them.

Owls are natural predators of moles, and by installing a nesting box on the property in late winter or early spring when owls are seeking nests, they can be easily introduced to an area marked by a vulnerable lawn, trees and shrubs.

A single owl can be an effective control for a small population, but larger infestations will require professional advice and solutions.

Buzz Them Away With Ultrasonic Devices

Ultrasonic devices do not always work, but sometimes the intermittent pulses they produce do annoy moles.

The buzzing can warn of another mole nearby digging in the same territory. Sometimes, moles will just adjust to the sound and keep on digging away at lawns.

Call Pestco For The Very Best In Mole And Vole Control!

Founded in 1948, we are a five-star, family-run company has been a consistent leader in pest-control and pest-management throughout Pittsburgh and western Pennsylvania.

Over the years, we have maintained a stellar reputation and our unwavering mission is and always has been to provide experienced, responsive and uncompromising pest control and pest-management services to all of our loyal customers.

Our pro-active approach entails an extensive and thorough examination of any affected property, both commercial and residential. Our technicians recognize that e every infestation is unique, so every solution is different.

We are all about versatility.

Our technicians are knowledgeable, attend workshops and are highly trained so that they can always keep a few steps ahead of moles, voles and other pests that can ruin the value of a home or residential property.

Our pest exclusion policy, which is a first line of defense against infestations, entails sealing up potential points of entry. Our main selling point is the fact that it’s much easier and safer for the environment to keep pests away from a property than it is to eradicate them once an infestation takes hold.

We guarantee results for any infestation and our technicians take the time to educate homeowners as to what they can do to minimize the risk of returning pests. And our teams welcome questions and offer helpful solutions.

If you are a homeowner living in the Pittsburgh area and plagued by moles and voles on your property, consider giving yourself some peace of mind by calling our specialists at Pestco — (412) 252-5200.

Let us help you keep your residence pest free … forever!